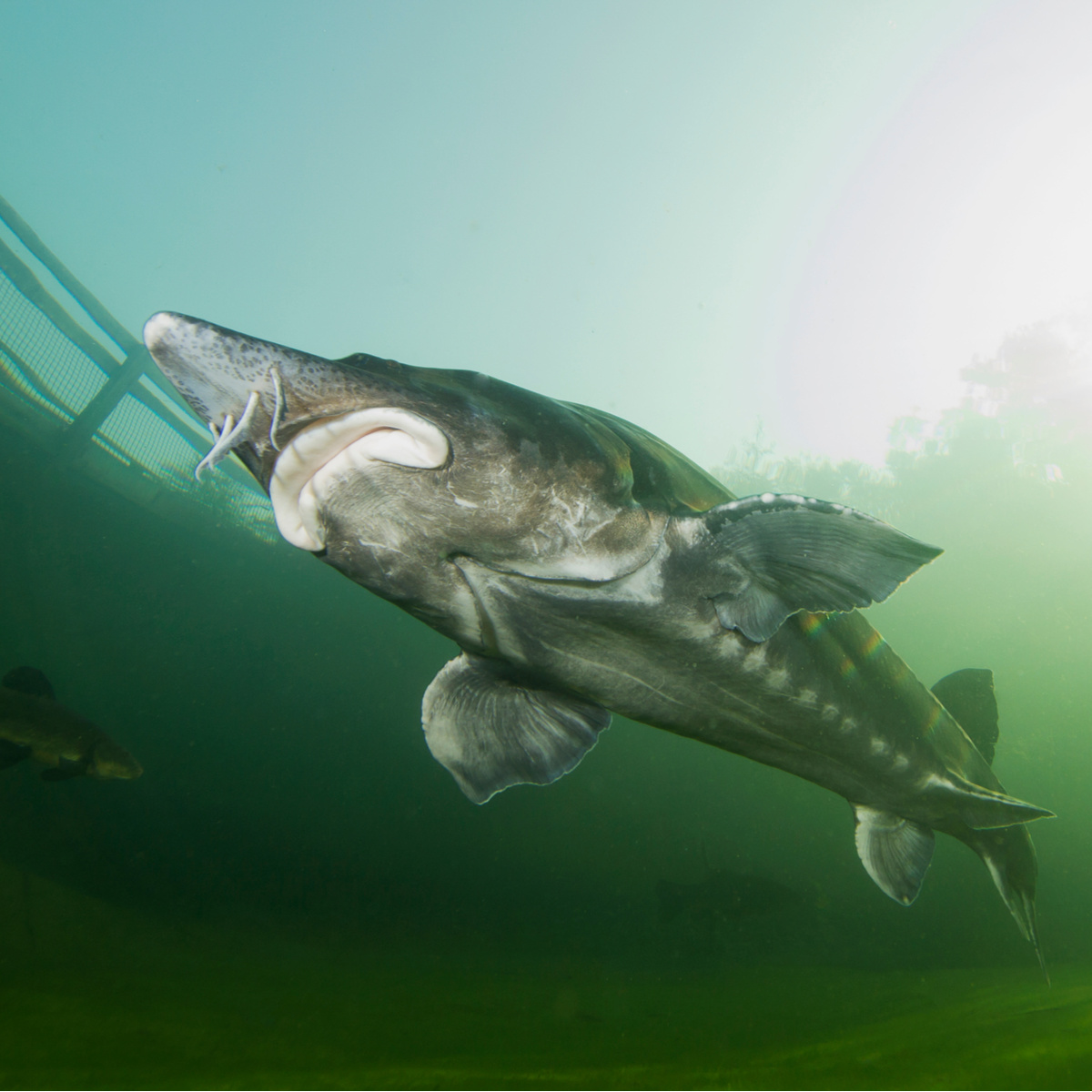 Yes, I promise you, there are many many fish to see in Québec’s cold waters. Yes in the Saint-Lawrence river, but also in the freshwater lakes all around the area! Yes I admit, tropical fish are more colorful, brighter, more vibrant, but here in Quebec we have incredible fish that many people don’t know much about. One of these really amazing fish is the Lake Sturgeon. I’ve admired these fish in aquariums and documentaries for a few years, and now I get to see them in the wild, which I find wonderful. So here are a few cool facts about this prehistoric fish so few know about!

There are 24 species of Sturgeons in the world, class Actinopterygii, family Acipenseridae. These fresh and coastal water fish have existed since the Triassic period, more than 245 million years ago. These prehistoric fish can grow to 3.5 meters, and weigh as much as 1500 kg. They are very characteristic in their appearance. Stout-nosed with downturned mouths, heterocercal caudal fins resembling that of sharks, and bony plates along their lateral lines give the Sturgeon its characteristic ancestral look. Their scaleless, smooth-skinned elongated bodies are unique to the species. These primitive features, as well as an almost entirely cartilaginous skeleton, make them closely comparable to sharks and other primitive bony fish. However, unlike most sharks, sturgeons are unique to Northern Hemisphere waters.

Although tough in appearance and powerful in movements, these fish are extremely docile and friendly. Their diets consist mainly of crustaceans and small benthic fish. Sturgeons have no teeth, which restricts their hunting abilities. Their hunting techniques rely heavily on tactile and chemosensory cues detected by the four barbels, and electroreception using their ampullae of Lorenzini.

Sturgeons are not very famous and well-known fish, despite how fascinating they are. However, their eggs are extremely popular in gastronomy. Caviar is a delicacy in many countries, and consists of salt-cured sturgeon eggs. Sturgeon are farmed by the thousands to provide for the extensive demand of this intricate food. Yet, the sturgeon populations of the world are in rapid decline. During the 19th century, wild sturgeons were hunted down to near extinction before conservation laws were inaugurated. Sturgeons are no sexually dimorphic, meaning there is no way to differentiate between a male and female from outside appearance. When hunting them, thousands of fish were caught, their stomachs cut open to reveal eggs, or an unlucky male. Because of this hunting technique, the populations were decimated in just a few years. As more than 85% of the world’s sturgeons are now vulnerable or worse, they are the most threatened family of fish in the world.

What can you do

Conservation efforts have restricted the hunting and killing of sturgeons throughout the world, and most caviar now comes from large fish farms. This helps sturgeon population slowly replenish, although their long-lived, late-maturing characteristics make this growth slow and difficult. However, in general, fish and other seafood coming from farms have a higher risk of sickness and contamination, as thousands of individuals are crammed in small spaces, which quickly accumulate parasites and viruses. There are no perfect solution: any seafood from the ocean has an immense impact on biodiversity and population numbers, while seafood from farms poses a threat to your health, and still to the environment due to close contamination. My advice: don’t eat caviar. Yes it’s good they tell me, but the cost of making caviar is too big. It’s kind of like nutella: it’s amazing, but the unspeakable amounts of palm oil in it and the consequences its creation has on orangutan populations...it’s just not worth it. The world and its animals needs our help, needs us to make sacrifices and reasonable decisions. Not spending 100$ on a bite of caviar is a reasonable decision. Save a fish, and spend that money on scuba diving gear!

Meeting a sturgeon in the wild is an experience you do not forget. Sebastian told me a story about his own encounter with a sturgeon in the Thousand Islands. “Sturgeons are big fish, stoic fish. If you are swimming in its way, it’s going to run into you. If it can’t get through, it’s going to back away, and it’s going to swim into you again. You never forget meeting a sturgeon. A prehistoric wonder. ” Sturgeons are magnificent fish, calm, soothing to watch swim. They are popular aquarium fish for these reasons, and because it makes breeding possible. Of course, it’s not enough for divers to admire these fish from behind thick glass. This is why a group of our divers decided to just jump into the aquarium and meet these prehistoric wonders. Our wonderful photographer Camille got some really impressive footage of the dive, enough to make anyone jealous. Want to check it out?