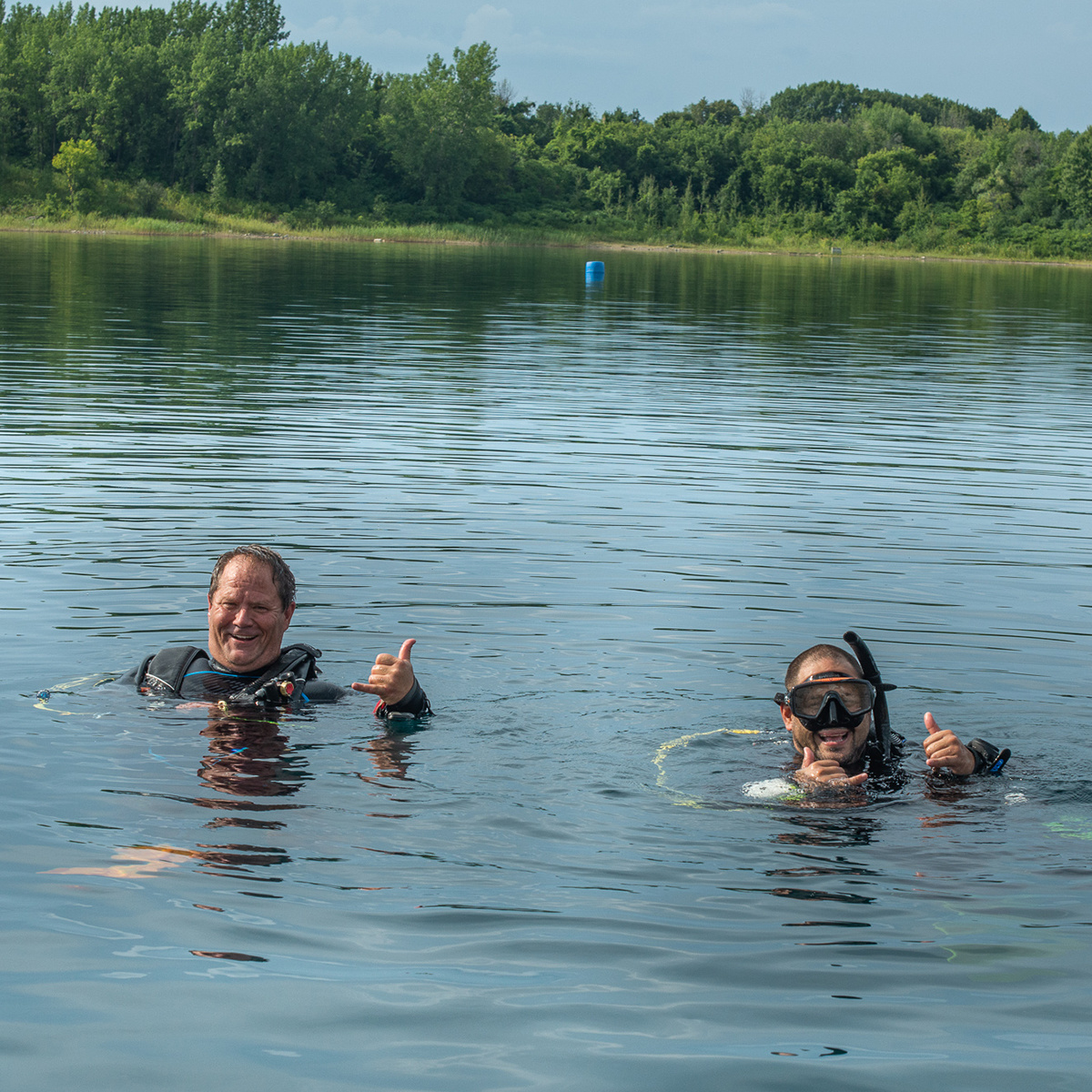 It was a cloudy Sunday late in the month of June. The shop had been bustling with divers all day. And 5 o’clock slowly came, and with it the promise of a dive beyond my imagination. Greg picked me up as I finished closing the store, we loaded my equipment and his tanks in the car, and drove down to the Kahnawake Quarry. The trip took quite a bit of time thanks to traffic, but it gave Greg time to brief me on the history of the Quarry, and its rules and regulations.

We drove down a long road, and turned right at the level of the big blue sign, turning into a little dirt road. The water was nowhere to be seen. We drove a bit further down and suddenly the lake appeared. Beautiful, quiet and rippling softly under the stormy sky. We parked, got out and went to see Scott, who was particularly surprised to see us. One dive to go! We got geared up, Greg in a wetsuit (crazy if you ask me, but his logic was: it’s June, if not now when?), and myself squeezing into a cozy drysuit. Down the dock we went, and into the water we plunged.

To be quite honest, I didn’t think much of cold water diving. I had a great ice diving experience this winter, but having never gone diving in normal cold water, I had strong prejudices about it. One, no visibility. Two, cold cold cold. Three, no corals and no fish to look at, hence nothing to look at. Four, no sun to warm my surface intervals (it’s a very important part for me). As I said, I was fairly prejudiced, but not close-minded. When we arrived, the still water of the Quarry and the atmosphere of the area instantly made me feel welcomed and excited. The water sits, calling for you, the trees rustle along its shore, the docks rock gently on the surface. Little pebblestones crunch as you walk around getting ready, and the air that fills your lungs is fresh and clean. Immediately I found the Quarry beautiful, and this was on a stormy day, with light rain and thunder humming in the distance. But nothing truly prepared me for what awaited below the surface.

We started our descent into the green depths of the lake. At that point all I could see was a white dolphin statue. But we soon reached the bottom of the first level of three, and I started seeing a lot more things than expected. The Kahnawake Quarry is covered with a grass-like algae on its bottom, but there is something fascinating about this algae. It sways gently in the water, and shifts greatly with the wave of a fin. It’s a golden white color, with darker dots of browns. It’s texture seems soft, fluffy, silky. I promised myself I’d never touch it, just to keep being amazed by the texture it presents. Trust me, I was quite surprised to be so completely mesmerized by algae of all things.

But Kahnawake was not done with me. As we swam along the ledge leading down to the second level, impressive rock formations, some covered by this golden algae, others sharp and dark, protruded from the bottom, forming an almost vertical wall down. I couldn’t see the bottom of the second level, just this strong wall of rock and algae, and it felt immense. I drifted up and down along that wall, admiring the rocks, the algae, and all the shapes and wonders hidden within them. That’s when Tom and Jerry arrived: two beautiful small mouth bass that followed us throughout the dive. They swam less than an arm’s length away, darting between us and burying in the algae to eat whatever food we kicked up with our fins. They were adorable. The god of Scuba Diving was on our side, because we also saw a pike. I could hear Greg screaming into his regulator because he was so excited. I decided pikes are just Canada’s barracuda's and I don’t like barracudas so I just glared at it a bit. Also if you’ve seen Disney’s “The Sword in the Stone”...you know. But it was still pretty awesome, if only to share Greg’s happiness.

This dive was absolutely mind blowing, and shattered all my prejudices, and words do not do it justice. Tree skeletons dotted the bottom, covered in zebra mussels, fish swimming around them. Rock formations dominated the view, and beautiful golden fluff covered it all. The dive was like an adventure, where every turn gives you a new, even more beautiful view. At one point, I found a big boulder, which was in line with a few others. And I hopped from one to the next, each surface having a different pattern. The end of my boulder-hopping journey was a large rock, perfectly smooth on top, and covered in entirely white algae. Adventure!

Even if every aspect of the dive amazed me, there was one thing that made me smile so widely water came into my mask from the bottom. Let’s talk temperature. The Quarry has a few thermoclines, and the water gets intensely colder as you descend. We stayed around the 10-12 meter mark, where the water was cold, but bearable. Before heading back, we arrived in a bowl-like formation, and I descended past the second thermocline. The water became painfully cold, biting at my face and hands. It was freezing, but it made me feel more alive than I had in a long time. I stayed a few minutes looking at the rocks, and I ascended back above the thermocline. The creeping warmth was the absolute best feeling, and made the rest of the dive particularly cozy. But that’s not even the best part.

For our safety stop, we ascended to 4 meters, and the water there felt like a jacuzzi. Like wrapping yourself in a warm blanket after walking in a blistering storm for an hour. My god I did not want to leave that safety stop, it felt amazing. But we did have to go eventually, so we swam towards the platform stairs. The thing is rain had stirred up an insane amount of silt and sand, so near the surface, visibility became inexistant. I watched Greg disappear into a foggy white cloud, followed, and was myself in this little cloud. It was warm, relaxing, I really didn’t want to get out. But I did. Sort of. I stayed a good while sitting on the platform all geared up refusing to get out. I feel quite bad for Scott and Greg. :)

Eventually they managed to get me out, a smile permanently plastered on my face, probably looking insane. We took our gear apart, made Scott jealous of our dive, and got ready to head home. The last blessing of the day: eating falafels with Scott while looking at a perfect rainbow.

This dive was incredible, thank you Greg and Scott for this amazing experience, and if you haven’t been to the Kahnawake Quarry yet, what are you waiting for?