Freediving, more accessible than ever! 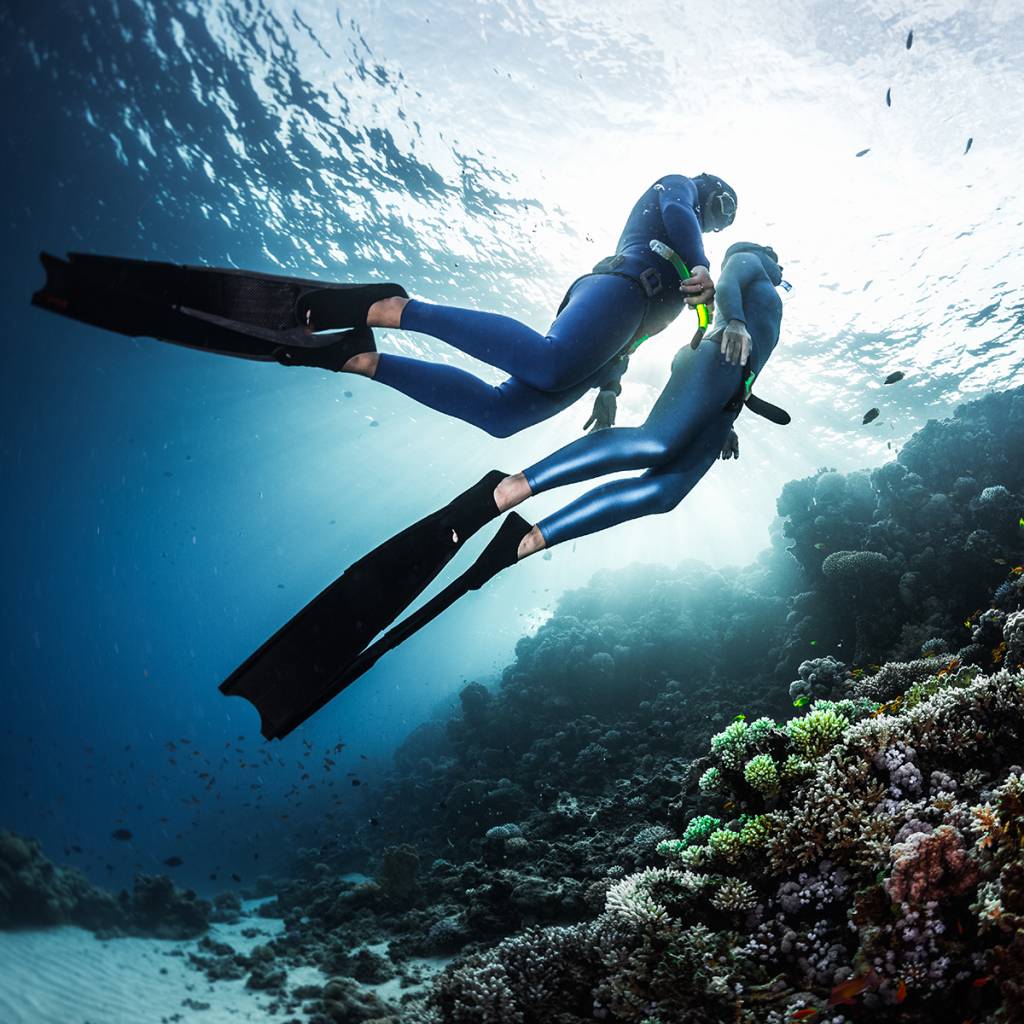 Freediving has always known how to fascinate people. Already, in 1988, the movie Le Grand Bleu from Luc Besson brings to theatres more than 9 million spectators as the movie first launches in France. It’s the beginning of a popularity that makes numerous new fellow freedivers. Since then, everyone knows who the great Jacques Mayol is and want his share of the phenomenon freediving has become. Today, apnea is more than ever accessible and diving centers can be found all around the world. Quebec is no exception, since many freediving clubs and federations are represented in our province.

Freediving remains a big question mark for those who have never heard such a word or that don’t quite get the concept behind it. It’s definition is a momentarily hold of your breath. Also, etymologically, the word comes from the greek apnoia which comes from a-«without» and pnein-«to breath».

Freediving has not always been a sport, it’s origin comes from our ancestors who used to fish by holding their breath and using a harpoon in order to survive some thousand years ago. The ocean is quite an hostile environment and it is only with the arrival of the first prototypes of fins and masks that its exploration was made easier. Therefore, freediving, as we know it today, started with dives at depths of 30 meters even though scientists agreed it would not be possible. The race for depth had begun, since that day, humankind has never stopped pushing back the frontiers of what is said to be his limits.

This sport has different disciplines which are, static, dynamic and depth. The first one consists on holding your breath as long as you can while floating still at the surface of the pool. The dynamic discipline has for goal to swim the longest horizontal distance possible by using or not fins. And for the last categorie, the depth one, the athletes must reach the deepest point they can, they have the possibility to descend with a weight (variant weight) and to use an air inflated balloon to bring them back to the surface once they reached the bottom with a weight (no limit). Also there is the possibility to drag yourself to a rope to descend and ascend (free immersion).

Humankind keep pushing back his boundaries by always reaching greater depths. In the 60’s, Enzo Maiorca and Jacques Mayol establish new records, it is Maiorca who first reached the 50 meters. The scientists thought that at such depth your lungs would simply collapse, but of course the human body won’t stop surprising us by the amazing way it adapts to any kind of situations. It is once more proven when, in the 70’s, Mayol breaks the 100 meters mark which had been his goal for years. Since then, freedivers around the world have kept breaking records after records to obtain the actual ones which are quite impressives. The static record is 11:35 minutes, the greatest distance swam with fins on breath-hold is 300 meters and without fins is 244 meters. The deepest official record is 214 meters by descending with a weight and ascending with an inflated balloon, it is of 130 meters with fins.

Sportive apnea is considered like an extreme sport, but it is mainly the case because it is not known well. Freediving is a quite recent sport and it is still figuring out itself as it gains experience. Freediving is not anymore dangerous then would be any other sport, actually it is the other way around. All sports involve risks of injuries, some more than others. Sports that often have physical contacts between its players are by far more dangerous than sportive apnea in which you are in the aquatic element that absorbs impact and that is mostly based on being zen which is the complete opposite of the excitation of the other sports. Of course there are risks in freediving just like in everything, but they are well restricted with security principles that are the golden rules of freediving. They are to never dive alone, which means that you need to be another freediver, not just a random person who doesn’t know what you’re doing and also always stay well under your limits. It is important not to improvise yourself an apneist, it requires a formation.

A sport that is accessible for all

Everyone has tried to hold his breath for as long as they could at some point in their life. Most think it is unpleasing and will feel the urge to breath after a few seconds. However, freediving is a sport that is mastered by having a good self-control, it’s fondement is to let go of everything in a very zen perspective. It is not dangerous to hold your breath for more than a few seconds and with a bit of practice and the right mindset it is most probable that you could last more than a minute or even two. All you need to do is relax and accept the fact that you don’t need to breath non stop since you have two lungs that are filled up with air that contain enough oxygen to fuel your body. Of course, by practicing often your body gets used to it and adapts. In classes, most of the students surprise themselves by what they can accomplish and had no clue they could do such things, it is a quite satisfying feeling. But beyond performances, freediving is a fun sport that allows you to be more eased in water. Even though it is commonly thought to be a complex sport, freediving is accessible for everyone.

Apnea allows you to feel free unlike anything else, the word “freediving” says it all. You are free of everything, it’s just you and the water, nothing separates you from it, it’s a true connection with the element. This “feeling-good vibe” just makes you forget all about the surface world, it makes you forget the heaviness of the daily routine. There is a meditative aspect in this sport, you have to learn how to listen to your body, but what is stunning about it is how fast you can access to that state of mind when you are relatively eased in water and keep on developing your apnea capacities. Only by being physically in contact with water your heartbeat lowers by 25% and it can even go as low as 12 pulse/minute for a depth of 250 meters.

Freediving is a sport that should be seen differently, for what it really is instead of the dangerous, inaccessible and complex sport it is too commonly thought to be. It is more than a simple sport, it is a lifestyle, a way to disconnect with the daily life, a way to discover yourself et to be surprised by what we all can do without even knowing it. Apnea is a proof of the extraordinary adaptation of humankind that never stops adapting itself to every situation and keeps on pushing back its boundaries.